In this lesson, students will learn about the history of the famous Mexican bingo game, Loteria and use the game to learn different vocabulary words commonly used in the Spanish language. This a fun way to improve the vocabulary of students as well as learn more about the Mexican culture! MexicoHistoryLa Loteria, A Mexican Bingo Game.pdf. Mexican loteria is a wonderful, traditional card game similar to bingo. (Make the image appear on white background). Loteria is also a form of folk art, as each of the colorful cards has an image of popular Mexican figures including 'el catrin' (the gentleman), 'el borracho' (the drunk), 'la calavera' (the skeleton), 'la chalupa' (the flower.

You may be surprised to know that the quintessential Mexican game called La Lotería has its origins in Europe and came to Mexico by way of Spain.

The traditional Loteria originated in Italy, moved to Spain, and finally came to Mexico in 1769. Initially played by the colonial Mexican elite, it eventually was embraced by all social classes.

In the 19th and early 20th centuries, Mexican farms and towns were few and far between. Traveling Ferias (fairs) would set up in these ranchlands and small towns on the weekends, and many people would go out to them especially to play Loteria.

The game is very similar to American Bingo, with some differences. In Bingo, a number with an associated letter is randomly chosen from a rotating drum, while in Loteria, with a colorfully illustrated image is drawn from a special deck of 54 cards. The modern versions of these cards also contain the name of the image at the bottom and an associated number at the top. In both games, each player has a different game board/tabla. In Bingo, the game board has random numbers listed under their associated letters, while in Loteria, the tabla has a random pattern of images matching those found on the cards.

Many of the older tablas do not have words or numbers, since the originally was found in prose. These tablas were made either out of tin or paper that had been painted by popular artists, some of whom specialized in this art form.

Lotería is often referred to as “Mexican Bingo.” For anyone who has had the opportunity to play Lotería, will find similarities in playing American Bingo. However, players will quickly realize, how much more visually and intellectually engaging and fun it is to play Lotería than the American Bingo game. In American Bingo, an announcer calls out the selected letters and numbers, such as “B-4” and the players mark their game boards accordingly.

In Lotería, the announcer gives an improvised short poem or familiar phrase alluding to the image on the card (e.g. “The coat for the poor” for the image of the sun, or “The one who dies by the mouth” for the image of the fish). Each player uses a chip -often a kernel of corn or a bean-to mark the corresponding spot on his or her tabla. In either game, the first player to appropriately fill the game board or tabla in a predefined pattern will shout either “Bingo!”or “Lotería!” to win the game and receive the prize.

Since poetic license is afforded to the announcer of Lotería, the success and popularity of the announcer depend on his cleverness and style.

The announcer’s approach will often depend on the social context in which the game is being played. At a church bazaar, for example, he might use a more tame humor, while for a game played in an adult setting he might use innuendos that are more risqué and derisive. Satire and references to contemporary events and politics are often a part of the word play involved; in fact, the linking of images to social commentary has existed since the inception of the game.

Loteria has been played as a game of chance, as a pastime, and for educational purposes. Because the Loteria cards include the name of the pictured character, they are used to teach reading, writing, history, and social values. Many bilingual teachers use the game as a teaching tool in the United States.

One of the more interesting historical versions was an educational , liturgical Loteria that appeared in the 1930’s. The images employed were objects and concepts found with the Catholic Church. This combination of the irreverence and banality of the game coupled with the solemnity of sacred symbols had some Catholics concerned. While the marriage of church and gambling in the form of Bingo in the United States is common, the initial attempt of the church-sanctioned liturgical loteria was more educational –to allow the parishioners to differentiate between a tunic and a maniple, for example.

Aztec Treasures – This 3D title, created by Betsoft, is one of the best-known slots based on this civilization. The machine uses a lighthearted theme with plenty of special features, including a free.

The most recognized version of Loteria is the “Don Clemente Gallo” rendition introduced into Mexico in 1887 by the French businessman, Don Clemente Jacques.

He purchased a manufacturing plant in Mexico to produce many items, including packaged food products, corks and bottles, and ammunition. In their printing press division they produced labels for the packaged foods, advertisements, invitations, party favors, calendars and the game La Loteria.

It was told to me by Gallo that when they packaged the canned food for the military rations they included a little game of Loteria for the soldiers to play to pass the time. When the soldiers would bring home the game to their families it was a big hit and became hugely popular with the general public thus creating a big demand and embraced fully within the Mexican culture. 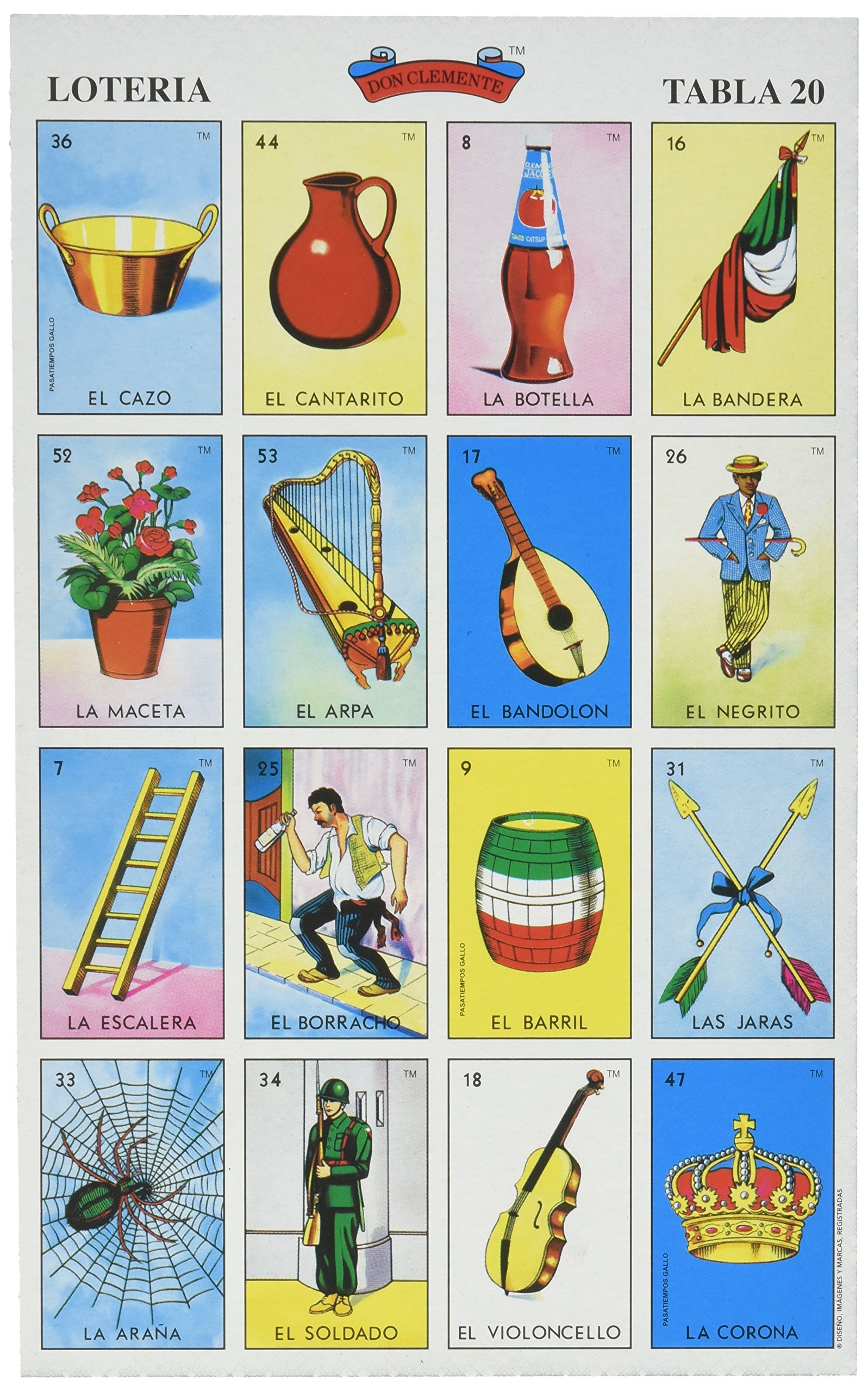 The owners today of of Don Clemente Gallo Pasatiempos own the registered trademark of the original images, including the most famous and better known images that have existed.

As Mexican culture spread across the border, so did the demand for the game within the United States. The original Don Clemente Gallo Loteria game can be purchased today not only in Mexico but also in the United States, and online all over the internet. Many collectors have been purchasing and sharing them online, perpetuating the love of Loteria and the cultural significance and historical value of this game.

While living in Mexico (2000) it was in the research, for my installation paintings that I first interviewed Gallo. Gallo was very generous with giving their time, historical facts and information for the development of this work. While meeting with Gallo, they had asked to see my paintings and so I had shown them a few sample paintings and the sketches for the remaining. They had liked what they saw and asked if they could use my images for publishing and distributing a new version of their game. They were excited at the thought of “sprucing up” the 100-year-old game, and I was excited too and thus the “Nuevo Versión” Lotería game was born.

Gallo produced and distributed it throughout Mexico and the US from 2001-2008. During the initial process of publishing this nuevo Loteria game, Gallo had offered me to have a higher end printing of the game than the original game. However, I wanted to keep with the historical intent when Lotería first came to Mexico for the purpose of soldiers’ passing the time, and to keep it affordable and available “for the masses.” Therefore the printing quality and the retail prices remained the same as the original lotería game. The royalties I received from Gallo, I donated back to Mexico to FAI Save the Children Foundation, Mexico.

In 2008, as did many businesses, Gallo cut back the production of many of their products because of the global economic recession, thus ending the production and distribution of el “Nuevo Verisión de Lotería.” Copyright for these Nuevo Loteria images now remain with me as my contract with Gallo has expired. For any of you who have purchased this version, you now have a “collectors item” and I hope you play it until it falls apart like my family’s has. And because I truly believe that “the experience is better than the artifact.”.