'B' and 'A' Yen
B&A型軍票 - B and A - Gata Gunpyō
US Military Currency
Click on the category below that you wish to see or scroll down the entire list.

Currency is often found graded by commercial and society grading services. The numerical grade and above descriptive grades are roughly as follow:

Some notes offered on this webpage have been graded by the Professional Money Guaranty (PMG), a commercial grading firm. For detailed information on PMG grades, click here. Currently the minimum PMG charge for grading a note is $25.00. That charge is factored into the pricingof PMG graded notes on this webpage.

'B' yen notes were initially issued in 10s, 50s, 1y, 5y, 10y, 20y and 100y denominations. In 1951 the 1000y denomination was introduced. While most notes were printed by Strecher-Traung, some notes of 1, 5, and all the 1,000 yen were printed in Japan by the Ministry of Finance's Printing Bureau and the 1 yen block B-B notes were printed by the US Bureau of Engraving and Printing. The 'B' yen currency was in use in Okinawa until 1958 giving it the distinction of being the longest in use US military currency of the World War II era.

Both 'B' and 'A' underprinted military currency yen notes bear the series number 100.

All 'B' underprint notes have block letters associated with printers.

Notes in all denominations from 10 sen to 100 yen were prepared in 1945 and ready for use immediately on the invasion of Okinawa, April 1, 1945. Troops on the invasion ships were allowed to draw small amounts of the 'B' yen and actually carried it ashore when they landed. The value of the 100 yen note was approximately 80c so it easy to understand that the need for a larger denomination note soon developed. The 1,000 yen notes were first issued in December of 1951.

Specimen replacement notes (blocks H-A with 'Specimen' perforation at bottom center) in booklets. There are 'H-A' replacement notes perforated 'Specimen' for all, Block A-A notes in the B yen series except for the 1,000 yen note. The 1,000 yen note did not exist when these booklets were prepared. I have seen these notes separately and in booklet form. Separate notes were probably removed from a booklet and generally have faint evidence of that on the reverse. The notes were tipped (attached by good quality glue) onto tabs in the booklet on the reverse side (right edge when viewing the back of the note). Some of these B yen booklets initially were classified 'Top Secret' with that handstamped on the outside front and back covers. One booklet I have examined carried a manuscript notation reading 'Classification Removed, 5/1/45.' Similar specimen notes exist for the 'A' underprinted notes (see below). The specimen booklets were intended to provide US Forces personnel advance knowledge the currency that would be placed in use with the invasion. (B Yen Specimens - A Yen Specimens)

The 'A' yen notes were issued in 10s, 50s, 1y, 5y, 10y, 20y and 100y denominations. All 'A' underprinted notes are block A-A except for replacements which are block H-A. Specimen replacement notes (block H-A with 'Specimen' perforation at the bottom center) exist for all 7 notes in this series.

5 Yen To Us Dollars

The 'A' underprinted notes were in use in Japan and the Ryukyu Islands for a little over two months (July 19, 1946 to September 30, 1946) but only as a form of military payment certificate and not by the civilian population. They were used in Korea from September 7, 1945 through July 10, 1946 as general currency (apparently more of an official recognized status than actual use) and from July 19 to September 30, 1946 as a form of military payment certificate.

The 'B' yen underprinted notes were used in Japan by the civilian population from September 6, 1945 through July 15, 1948.

Our Live Casino has everything your heart desires: Live Roulette, Live Blackjack, Live Poker, the world of live entertainment and incredible winnings has no limits! Our Highly advanced provider of our Live Casino. Live Casino Whether you’re on the go or tucked up at home, the bwin Live Casino brings the real-life Casino experience to you! Let our lovely Live Dealers welcome you to all the Casino classics that you. Step inside to meet our professional Live Dealers, show them what heroes are made of and beat them with the best hand possible! Experience the larger than life suspense of Blackjack. Our Live Blackjack is probably the fasted Blackjack on the planet with a pace as dynamic as in a real brick and mortar Casino. Bwin live casino download.

Minoru Sera, in his Ryukyus Handbook,* published a chart (page 195) outlining these various currency stages in the Ryukyu Islands as it related to the civilian population. The discussion in the preceding paragraph is based upon the information in that chart.

The civilian (non-US Forces) monetary system existing in the Ryukyu Islands immediately after WWII is discussed in a 2003 'Working Paper'** published by the Department of Economics, Vanderbilt University. The discussion of the monetary system for the civilian population tracks the discussion by M. Sera but is confusing as it relates to the prohibition of the use of 'B' yen by the civilian population during the period from September 1, 1946 to August 1, 1947. Also, the author's did not mention the use of the revalidated old Japanese notes. The working paper notes that on July 15, 1948, the Japanese Ministry of Finance issued a directive '..terminating the status of B-yen notes as legal tender in Japan.'

Death and Burial of a Currency. When the B Yen currency was demonetized it was reported that the remains were disposed of in an unusual manner. Rather than the traditional cremation (incineration) old paper currency usually faces, it is reported to have been provided a Mafia type burial at sea.

At this point, months of planning came to fruition as the monumental logistical task was undertaken of distributing 90 tons of money to over 830,000 Ryukyuans on some 15 islands and to approximately 15,000 U. S. Forces personnel, and withdrawing, verifying and destroying the type 'B' Yen in circulation, and verifying and destroying the substantial amounts of unissued type 'B' Yen held in reserve. The plan established the Bank of the Ryukyus as the principal agent of the USCAR Funding Officer. The bank in turn, distributed currency to almost 150 central and branch offices of Ryukyuan post offices, and banks and other financial institutions. The military forces provided armed guards to augment the protection afforded by Ryukyuan police and transported currency and tellers in trucks, boats, aircraft and helicopters. In addition, uniformed personnel verified the type 'B' Yen collected, sealed it in large concrete blocks after covering it with indelible red dye, and dumped these blocks into the sea at unrecoverable depths. (Emphasis added) (Source: Civil Affairs Activities in the Ryukyu Islands for the Period Ending 30 September 1958, Volume VI Number II, Published by United States Civil Administration of the Ryukyu Islands) (Information provided courtesy of Donn Cuson Remembering Okinawa History).

The 'A' and 'B' yen notes are catalogued/discussed in the below references. 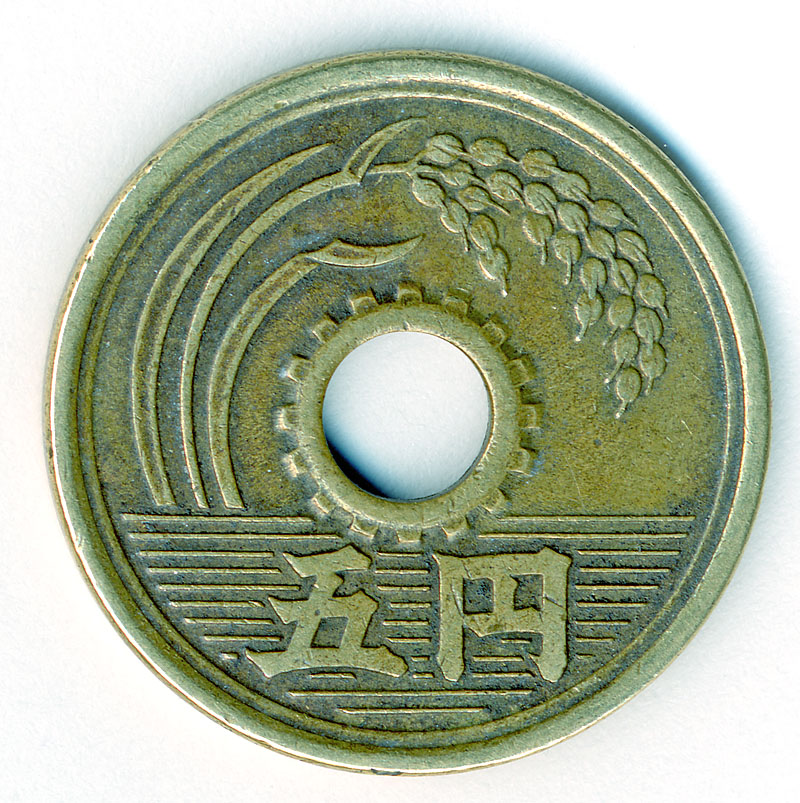 Revalidated with Shoshi - Old Japanese yen Notes. In March of 1946 all Japanese notes of 5 yen or more in denomination were declared invalid effective April 28, 1946. Between April 15 and April 28 the soon to be demonetized notes could be exchanged 'New' issue Bank of Japan notes or be revalidated. The 'revalidated/revalued notes' carried an adhesive revalidation sticker (shoshi) that was affixed in the area at the upper right corner of the note. The revalidated notes are found in the 10y, 100y, 200y and 1000y denominations. The 1000y and 200y shoshi are quite scarce and almost never actually found affixed to a note. For information on these revalidation/revalue stickers click here. These 'revalidated' notes are listed in the Standard Catalogue of World Paper Money (Pick catalogue) as the Japan '1946 Provisional Issue' and assigned catalogue numbers of 79 (10y), 80 (100y), 81 (200y) and 82 (1000y). This revalidation was required in Japan and in the Ryukyu Islands.

Most Japanese people believe in destiny. The term 'go-en' (ご縁) refers to those seemingly serendipitous encounters that result in long and meaningful relationships. It would often mean a bond between people but it could also refer to connections with objects (like a house, a painting, or even a favourite teacup!) or a calling. Ask people how their career started, how they met their partners or how they found that perfect piece of furniture. Most answers would probably boil down to a mixture of perseverance and luck. Japanese people would say 'Go-en ga arimashita.' (ご縁がありました。）There was 'go-en' involved in the outcome. It was meant to be!

The Japanese 5-yen coin is also called “go-en” 五円. Because it sounds the same as the “go-en” of destiny, many Japanese people believe that having a 5-yen coin around helps them find what the Universe has in store for them. It could be a soul-mate, a dream job, the perfect house, etc. In shrines and temples, it is also the coin of choice when tossing a token offering into the collection box (賽銭箱 saisen-bako) whilst saying a prayer of thanks and/or a wish for something in the future (in that order). The 5-yen coin helps along the good luck and the serendipity that is actually meant to be!

Extra trivia: Using a 10-yen coin for your prayers and wishes is not advisable. Another word for '10' is 'toh' (十). So, the 10-yen coin could be called 'toh-en' (十円). Now, another meaning for the word 'toh' (遠) is 'far' ..and putting them together as 'toh-en', it can be written as '遠縁', which means 'far destiny'! So the 10-yen coin is something that keeps your destiny out-of-reach!

How Much Is 5 Yen

We made a few items to help keep your lucky 5-yen coin handy, always ready to to attract the good luck in! All hand-made in-house with loving care. Available at the shop while supply lasts.