Like Ike? Plenty of coin collectors do! A growing number of numismatists are building sets of Eisenhower dollars.

Read below for a full list of Eisenhower dollar prices.

The Eisenhower dollar was struck from 1971 through 1978 and was intended for regular commerce. Ultimately it failed to see the light of day as a circulating coin beyond the casinos of Las Vegas.

Few people knew back in the 1970s that the Eisenhower dollar would be the last circulating large-size dollar coin in the United States.

Today, it's become one of the top modern collectible coins, and for good reason. Ike dollars constitute a relatively short series with many unusual varieties to collect.

What Are Eisenhower Dollars Worth?

Eisenhower dollars appeal to collectors on a variety of budgets. Many pieces challenge even financially well-heeled collectors. Prices for some key date Ike dollars reach into the thousands of dollars.

Nonetheless, the majority of Eisenhower dollars are much more affordable to obtain. What follows is an Eisenhower dollar price guide. The values reflect examples in MS-63 (uncirculated) and Proof-65 grades.

All the values listed above represent typical specimens. These have regular surface quality for their respective grades and conditions.

Better pieces command significantly higher premiums than the prices listed above. This is due to the difficulty of locating Eisenhower dollars (mainly clad business strikes) with few marks.

How the Eisenhower Dollar Was Created

Cupro-nickel clad versions were produced at the Philadelphia and Denver Mint for circulation. Meanwhile, 40% silver examples were made in San Francisco as proofs for collectors.

Copper-nickel S-mint proofs didn't come around until 1973. This was the first year that regular uncirculated sets and proof sets included the Eisenhower dollar.

In 1975, the U.S. Mint began producing special commemorative circulating Eisenhower dollars honoring the 200th anniversary of the signing of the Declaration of Independence.

These Bicentennial dollars showcase a dual-dating feature declaring 1776–1976 on the obverse. The reverse design by Dennis Williams features the Liberty Bell superimposed on the Moon.

The standard Eisenhower dollar reverse and obverse dating resumed in 1977. Yet the end was in sight for the coin in 1978.

The public deemed the Eisenhower dollar too large. Americans were unwilling to carry large numbers of the heavy dollar coins during a period of runaway inflation.

The large dollar coin had failed to circulate well and was thus retired before 1979. This was when the Susan B. Anthony dollar, also designed by Gasparro, entered circulation.

However, the Susan B. Anthony dollar never caught on with the public, either. It was retired shortly after that in 1981. It returned for a one-year stint a general later in 1999 before being put out to numismatic pasture for good. 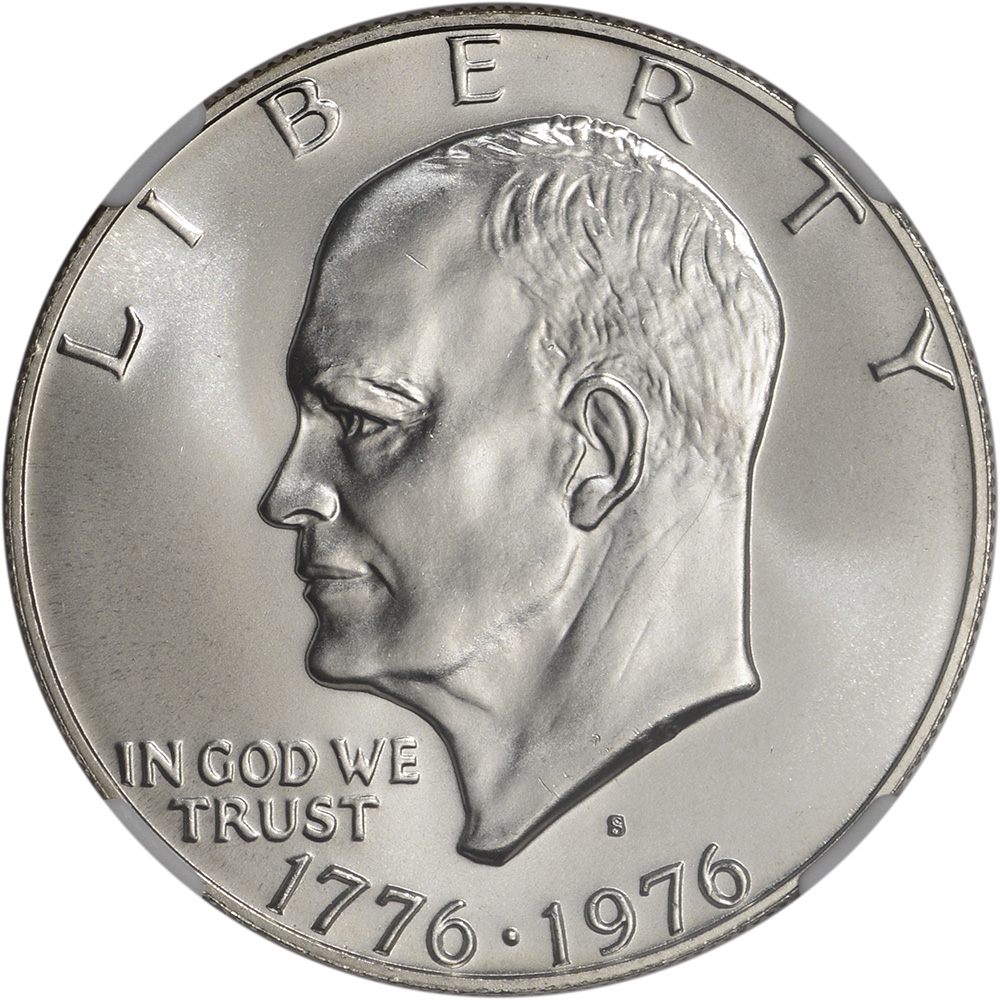 Such a set can be completed with coins in typical uncirculated and proof grades for less than $500. That includes the 40% silver key dates mentioned above.

Collectors with deeper pockets will add a much more expensive dimension to their Ike dollar objectives. They often pursue each of the regular-issue clad coins in Gem grades. They target proofs that grade Proof-67 or higher. Many will also seek the abundance of scarce varieties known for this series.

Surprisingly, clad business strikes in grades of MS-65 to MS-66 or better are among the most valuable Eisenhower dollars. There are few such Ikes that grade MS-68 or better.

The United States Mint took little care in handling or transporting these large, heavy circulating dollar coins. Understanding this, it becomes clearer why clad Ikes in Gem condition are so tough to locate. Most of the rarest Gem examples trade for more than $1,000 today.

Top-end proofs are not nearly as rare as their high-grade clad business-strike counterparts. They are tough to find with full cameo frosting, however. The 40% silver Ikes are among the easiest examples to find in grades of Proof-69 or Proof-70.

Meanwhile, deep cameo contrast is most common on the 1977-S and 1978-S Eisenhower dollars. This originated from a period when deep cameo frosting was becoming more the norm rather than the exception for U.S. proof coinage.

The Eisenhower dollar boasts a wide array of varieties. Those who collect design varieties have plenty to love.

The most popular varieties are found among 1972 Ikes. It showcases at least three different versions of planet Earth on the reverse design.

Clearly, there are some geography issues at hand with these varieties. They keep collectors busy!

Several other exciting oddities are out there. This includes various doubled dies and the rare 1974-D and 1977-D 40% silver transitional wrong-metal strikes.

Selling price of old indian coins. These modern clad coins offer a multitude of rewarding opportunities for collecting, research, and discovery—enough to satisfy even the most passionate of dedicated collectors for a lifetime!