We are pleased to offer for sale this 1951-D Wheat Penny Lincoln Wheat Cent Gem BU Red. This 1951-D Wheat Penny is Brilliant Uncirculated (BU) and full Red. All of our BU coins have no major marks or visible problems and are taken from BU rolls. This means that the 1951-D Wheat Penny will make a great addition to any circulated Wheat Penny collection, and a great value.
The 1951-D Wheat Penny is comprised of .950 (95%) copper and .050 (5%) tin and zinc with a diameter of 19mm and a mass of 3.1 grams. The Wheat Penny was desgined at the behest of President Theodore Roosevelt, who lamented the lack of artistic merit in U.S. Currency. Roosevelt originally chose sculptor Augustus Saint-Gaudens, a noted sculptor, to design what became the Wheat Penny. However, when Saint-Gaudens passed away, the job fell to Victor David Brenner. Roosevelt felt that the new cent should honor his fellow Republican Abraham Lincoln because of the impending 100th Anniversary of Lincoln's birth, which came in 1909.
Both the obverse and the reverse of the Wheat Penny were designed by Victor David Brenner, who featured a profile of Lincoln on the obverse along with the word 'Liberty' and the motto 'In God We Trust'. The reverse of the features two ears of durum wheat, which give the coin its common name, as well as the Latin phrase 'E Pluribus Unum,' which means 'out of many, one.' The inclusion of Brenner's initials on the reverse of the coin also caused significant controversy upon the release of the Wheat Penny. Due to a public outcry, stoked by a bit of yellow journalism, the initials were removed from the coin until 1918, when they were placed on Lincoln's shoulder next to the rim.
The 1951-D Wheat Penny Lincoln Wheat Cent Gem BU Red is a beautiful coin that is full Red and Brilliant Uncirculated, perfect for any collector, and a great value!
Check out all of our Uncirculated Wheat Pennies! 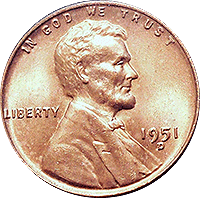